Our default decision should always be to not backport, but fixes for security issues, serious problems with no workaround, and documentation fixes are backported to the most recent two release branches, if applicable to that branch. (for example, the most current two release branches are release-branch.go1.16 and release-branch.go1.17, from which new Go 1.16.x and Go 1.17.x releases are cut) Fixes for experimental ports are generally not backported.

A “serious” problem is one that prevents a program from working at all.

As soon as an interested party thinks an issue should be considered for backport, they open one or two “child” issues titled like package: title [1.17 backport]. The issue should include a link to the original issue and a short rationale about why the backport might be needed.

GopherBot is capable of opening the backport issues automatically in response to comments like the following on the main issue. (The keywords are @gopherbot, backport, please and optionally the release. The entire message is quoted in the new issue.)

@gopherbot please consider this for backport to 1.17, it's a regression.

@gopherbot please open the backport tracking issues. This is a severe compiler bug.

The fix is developed for the main issue, which is closed when the fix is merged to the master branch.

The child issue is assigned to the minor release milestone and labeled CherryPickCandidate, and its candidacy is discussed there. Once it is approved it transitions to CherryPickApproved. Release managers (a subset of the Go team that handles the release process) and/or code owners approve cherry-picks via an informal process.

When the child issue is labeled CherryPickApproved, the original author of the change fixing that issue should immediately create and mail a cherry-pick change against the release branch, which will be merged as soon as it is ready, closing the child issue.

At release time, any open backport issue which is not release-blocker is pushed to the next minor release milestone, and a minor release is minted with the already merged changes.

Note that only the authors of the original CL (or maintainers with the "impersonate" permission) have the ability to create the cherry-pick.

Once the main fix has been submitted to master, please make a cherry-pick CL to the applicable release branch.

You can use the Gerrit UI to make a cherry-pick if there are no merge conflicts: 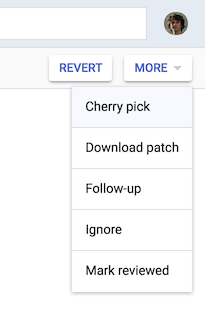 To cherry-pick from the command line or to resolve a merge conflict, take note of the final commit hash, then use git codereview and git cherry-pick to prepare a cherry-pick CL:

The cherry-pick CL must include a message prefix like [release-branch.go1.10], and update the "Fixes" line to the child issue. Do not change or remove the "Change-Id" line nor the other Gerrit lines.

Gerrit is configured to only allow release managers to submit to release branches, but the code review process is otherwise the usual.

At this time, it's not possible to make a cherry-pick CL by sending a [[Pull Request|GerritBot]]. Only Gerrit is supported. See golang.org/issue/30037.

Note: This section describes process used for security releases before the new security policy was applied. It is not current.

Security releases preempt the next minor release and need to ship only the security fix.